Defeated in combat by The Chosen One (First virus)

The Dark Lord (The creator of ViraBot)

Virabot was a virus that initially served as the main antagonist in The Virus and The Chosen One's Return. Originally discovered in ALANSPC out of nowhere, it was revealed to be an engineered weapon of chaos created and sent by The Dark Lord in Animator vs. Animation Shorts - The Flashback.

ViraBot is a spider-shaped virus that has a dark red body, with a light red outline. The body is oval-shaped, with pincers with a small horn on either side of the pincers. Virabot has two back legs that it stands on and fights with, and also has two front arms that it fights with, and uses it's abilities with.

The Virabot is discovered in Noogai's computer by Second Coming and Noogai after they finish an animation. Noticing his computer's high CPU temperatures, he discovers an app called Virabot.exe taking up most of the CPU's power. Both The Second Coming and Alan try deleting and eventually breaking open the app, but it releases the true threat inside. The virus quickly destroys Noogai's mouse cursor. When Alan tries to get it back using his keyboard, the search menu gets sliced by ViraBot. With Alan neutralized, ViraBot faces the Fighting Stick Figures and easily defeats them in combat, trapping them in its webbing. As he prepares to kill them, the virus is knocked back by an explosion, revealing a portal and a strange stick figure emerges. Deciding to end the Stick's lives later, Virabot engages the mysterious being in a brutal battle.

Revealed as The Chosen One, ViraBot engaged him in a highly destructive battle. First, it tries fighting The Chosen One but is outmatched in physical combat. It tries hitting him with its corrosive spines but it is found The Chosen One is immune to its corrosive nature. Knocked back by a flame of fire and wall of lasers, it retreats into the computer's windows and forms a giant version of itself with the computer's broken windows. Initially gaining the upper hand through sheer volume of attacks, The Chosen One forms an aura of power surrounding him and punches the computer's taskbar, purifying anything the Virus has created such as webbing and window pieces. The virus is found in a storage file and The Chosen One begins his final assault. He first punches and kicks the virus with enhanced speed and reflexes, then traps it in a tornado to hold it in places. Soon, the virus is rained upon by lightning, lasers, and fire. With one final punch, The Chosen One destroys the virus and it vanishes into nothing, ending its short-lived destruction.

It is shown in this episode that the Virabot was originally created by The Dark Lord. The Chosen One witnesses a showcase involving The Dark Lord stabbing a globe resting on a table with a spike. Upon contact, the globe and table dissolve into red binary code. The Chosen One then has a vision of the future of spiders that The Dark Lord created to destroy all stick figures and is unnerved. Upon deciding that the spider is finished, The Dark Lord took its egg and loaded it into a gun aimed at a certain computer among others. The Chosen One saw it was Noogai's (ALANSPC) and despite remembering their bitter past, he relented firing it. The Dark Lord, however, wouldn't relent and was eventually tired of his friend's reconsideration. This resulted with the two former friends engaging in a short but vicious duel, ending with The Dark Lord's defeat but the cannon firing. As The Chosen One races after the egg, he is stopped by the firewall while the egg lands in Noogai's computer, setting the scene for the second episode. In the end, the Virabot was defeated.

ViraBot has many abilities that all come down to being combat-equipped arachnid virus based. 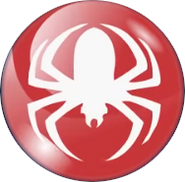 ViraBot
Add a photo to this gallery

Retrieved from "https://animatorvsanimation.fandom.com/wiki/ViraBot?oldid=18043"
Community content is available under CC-BY-SA unless otherwise noted.